Digging into the legacy of Chicago's Gramaphone Records

Music plays an outsized role in the cultural lifeblood of Chicago. It's a city that has served as a bassinet for the electrified delta blues, modern gospel music, creative jazz music, alt-country and house music (among countless other sub-genres.) And two long-standing cathedrals of Chicago's music culture are record stores and clubs, places where lovers of sound can connect and build. Vocalo Radio in Chicago lets us in on how one such cathedral, Gramaphone Records, has fared in a rapidly evolving retail climate.

As was the case in many cities, the pandemic put an end to in-person shopping and club-going in Chicago for months at a time, threatening the livelihoods of musicians, DJs, and proprietors alike. A collective of small Chicago venues organized to garner government assistance, while record stores experimented with new models, such as revamped websites and promotional live streams, to stay afloat.

Jesse De La Pena of Vocalo Radio in Chicago dug into the cultural significance of Gramaphone Records for the store's 50th anniversary, which took place just before the pandemic hit.

Jesse De La Pena had a front row seat to the cultural impact of Gramaphone as an employee back in the 1990s making his way through Chicago's club scene. "There [have] been many artists [and] DJs that have worked there: everybody from Derrick Carter to Ralphi Rosario, DJ Sneak, Psycho-B," he says. "It was a fun little job that a lot of us worked part-time, before a lot of those DJs were touring and making a living from it."

"If you came in there in the '80s and '90s, you would see some of the hottest DJs on the scene actually working there and helping you find the music you needed, whether you were into rock or alternative, new wave, techno, house or the mix show format," he explains, giving props specifically to former manager Andy Moy, who De La Pena says helped introduce the section of house and dance music in the 1980s. "We were getting [the music] before a lot of people. This is when radio didn't dictate music. It was in the clubs first, then radio got hold of it."

"I can think of Saturday afternoons, everybody was there getting their music for the parties that were going on in the weekend," De La Pena says. "You would be patiently waiting your turn to grab a turntable so you could listen to some new tunes. If you heard something, you'd signal out that you'd take it. But I've seen altercations over that last record in Gramaphone."

"If you're not from Chicago and you're interested in electronic music or house music, 'til this day Gramaphone does a great job of curating a lot of cutting edge music in various genres," De La Pena says. "[The] majority of big DJ producers that come in from Europe or Japan, they all got to make it by Gramaphone. It is a must stop if you make it to Chicago."

In September Marketplace noted that "vinyl records are selling at twice the clip of a year ago," while the The New York Times reported in October that 17 million vinyl records were sold in the United States in the first six months of 2021, outpacing CDs and ironically fueling vinyl record shortages and "unprecedented delays" in shipments.

Jesse De La Pena caught up with Gramaphone's proprietor Michael Serafini to talk about the cultural significance of record stores, how the store has weathered the pandemic, and whether the stalwart record shop has reaped the benefits of the current vinyl resurgence.

Jesse De La Pena: What is your take on the role that record stores play in the culture, mainly in Chicago?

Michael Serafini: The role that record stores take is an experience that probably [involves] all five senses of a person — your visual, your oral, your scent, your smell. You walk into a record store and there's a smell that you smell from the records. There's the visual, which is the records physically themselves, or the design or the artwork displayed in the store, and the interaction socially between people shopping.

There's always the customer that doesn't ever want to talk to anybody, the person who starts chatting up another person or has questions for you. Even though there [are] algorithms online that can help a person shop, there [are] still people who are like, "Oh, thanks for the recommendations. I wouldn't have even thought of this or found this if I was shopping online."

It definitely is an experience for some people who are not just in the digital realm, if they're looking for something physical for themselves that pertains to music and art.

Changing With The Times

How is the store doing? It's been a little while since I've been in.

Overall, the store's been doing better. It's actually been decent. A lot of it is fueled by tourists who haven't been traveling since the pandemic and are coming, [saying] "it's been two years since I've been here, it's been a year and a half."

[With] local DJs, there hasn't necessarily been an uptick in them coming to the shop. During the pandemic local people did help us by buying online and picking up, even if it was a couple records. The clubs are opening up now, but the clubs are digital. That's not really a vinyl scene.

The restaurants [and] the bars, a bunch of them closed during the pandemic. Some of them have reopened and so there are some local people that have gigs at the local restaurant bar. There's a new hotspot that everybody's going to, the Podlasie. It's this Polish bar over on Central Park and Milwaukee. It used to be a Polka bar, pretty much four old Polish dudes sitting at the bar. Alejandro [Zera], who used to work at Gramaphone and works at Smartbar now, he's an 80-year-old in a 29-year-old body, he found the place.

The whole game has changed after [the] pandemic, and the method of buying [vinyl] ...

Well, it was changing before that. Definitely things have been better, but I [also have a] bare-bones staff. Not having another person to pay has helped, but I am doing everything, dude. I order, I do all of it. And it's crazy because, especially with the breakdown of the distributors in the record business, I'm buying from Bandcamp pages, from artists, from labels, from distributors overseas, from distributors in the States. It's crazy. I don't even know how I keep track of it all. The pandemic definitely made an impact.

Anything else you'd like to add to how it's changed or how you've adjusted?

I think people still are in that pandemic mentality. Outside of my business, during the week, it's dead at night. People aren't anywhere. Pre-pandemic, you could go to a bunch of local bars and there'd be things going on. Now, you're just like, "Okay, there's Debonair on Tuesday. There's this one place on Thursday." [Everything] is a weekend thing now, so we changed the store so we're closed Monday through Wednesday.

I'm going to wait until the spring and see if things get a little more back to normal again, but it's been working out all right. Why should I just be sitting at a place where I'm not making any money when I can at least have a couple days to enjoy myself?

What is it like to own a vinyl record store in 2021? There's a lot of talk about the resurgence and there's the trendy side of it, but in Chicago, what is it like?

There definitely was a resurgence and we do see a lot of those young people come through the store, but that resurgence is more for rock and jazz. One thing that crowd does come into the store for that a lot of other record stores in the city don't do is hip-hop. We definitely have people who are buying those hip-hop albums.

We see with electronic music that people are pressing compilations on vinyl more now than before, because people are listening, not just DJing with those. I've become Professor Serafini, I guess, because people come in and they have questions, "What do I need to play records? What's a good turntable? What are the best needles? What kind of needles do you have to play music?" And definitely there [are] still people who buy 12-inch singles and guys who are DJing with vinyl, but it definitely is not like it was back in the day for sure.

Any plans in the new year for the store or you in general?

It's hard to have anything planned right now with the way things are going still in society with a pandemic. There are no big plans for the store, for any events or any changes in particular. We do have something coming up that we're working on, a project with [Chicago-area native and men's artistic director of Louis Vuitton] Virgil Abloh. He's designed some Gramaphone shirts.

For us, dude, they are so not at all what I thought they would be. They look like softball shirts that your company team has.

He kind of took the Gramaphone font and played with it and it looks almost like a varsity shirt, but I don't know [Abloh's] Off-White brand. And my boyfriend and a couple other people were like, "you obviously don't know the Off-White brand because that's kind of his aesthetic, [there] is not much to it."

The fact his name is attached to it and Gramaphone, it should be interesting to see.

We're going to donate some of the proceeds from the sales of the shirt to the Frankie Knuckles Foundation. He was super generous. His team is actually fueling all of this and they've been open to any ideas and suggestions that I've had. I've been slacking a little on getting it pushed through, but we're almost there now. [The shirts] look really good. 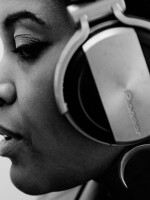